This journal is FRIENDS ONLY.

the last few weeks have been a fuzzy blur of salt and sweat and the smell of rain.
i've been working more than ever, anticipating my france year and desperately trying to save (to no avail).
i've been seeing people who i love to see, bumping into people i hardly ever see, and just generally grinning from ear to ear.
uni starts up in a little over a week and i am actually looking forward to my language classes so much that i am not dreading the start of a new academic year.
i am off to work now, going out to panthers tonight and playing with cocktail glasses.
things still look bleak in some aspects - some things just never change - but the difference between now and the me of a year ago is that now i wouldn't trade my life for anything in the world.

post anonymously and tell me what you think of this livejournal (and me, if you so wish).

fun?
whingy?
over the top?
interesting?
it's up to you.

IP addresses aren't being logged and i am just curious because i was just browsing some old entries and i am particularly moody lately...

after MUCH delay, i finally have some spare time to upload all my freaking formal photos.

be patient, there are a lot.

they are also of varying quality as i used three different cameras over the night.


it was november 24th, and everyone and i mean EVERYONE looked stunning.

it still lingers in my mind at least three times a day, it was just THAT fantastic.

also, prepare yourself for the hilarity of the afterparty!shots!


so, without further delay, i present:

my darling tim and i outside the log cabin, where the formal was hosted for the evening. it's quaint, and beautiful.

haha i love you if you read all that. not that there's a lot of reading, it's more "viewing". but either way, ahaha. so long.

i'm baaaaaack.
well, i technically got back last night at like midnight, but i went straight to tim's and only just got home.
i have so much to write about but i miss my bed and so this will [hopefully] be brief.

byron bay is just beautiful.
everything is so calm and relaxed and i just felt so free and independent all week.
it's weird to be back at home, actually.
we went to the beach and sunbaked, went swimming in the ocean and the pool at the tourist park we stayed at [absolute hole by the way, it was so disgusting. and, like i said earlier, the guy was a fucking nazi!] and, on some days, did absolutely nothing.
most nights we would have dinner there, i would just make pasta because it's cheap, but a couple of nights we had barbecues.
on the last night, we went out for dinner at a cafe and it was lovely.

the people in byron bay are so aware of nature though, we got death stared when we would ask for a plastic bag... it was so bizarre.
in woolworths one day we were just getting some meat for our barbecue and the lady said "would you like a bag?" and so jess said "yes please" and she stared at her and snapped, "can't you fit it in one of yours?!"
needless to say, we were definitely taken aback.

on sunday we went to the markets and i got hot chips and asked for a fork and the guy "lent" me a plastic one as long as i promised to give it back.
it was like plastic was some big secret there, i was so amazed.

this morning i woke up alone, not next to reenie or jess, and i was spaced out. so i listened to panic! at the disco's "i write sins not tragedies", which is the official schoolies 2005 song for us four. so fantastic. so catchy.

anyway, i think that's all for now. maybe later in the week i will post up some various tidbits, but for now i leave you with some snippets and our schoolies mix.

snippets of our conversations throughout the week:

me: i feel like some fruit!
jess: there's an organic fruit place out the front if you want.
me: organic?! jesssss, i want real fruit!

on the train yesterday, reenie and i were talking about how good looking this guy was that had just walked past us, and i mean i was gushing, and we discussed it for a loooong time. about half an hour later, she noticed that he was sitting DIRECTLY behind me. and we were totally clueless. we had NO IDEA. and those of you who know me know that i am incredibly loud. i am POSITIVE that he heard as well, because later on justin went up to him and jokingly said "my friend says hi".
ohgodsoembarrassing.

this entry is still going... i cannot believe it.

ohohoh! one night i passed out on concrete.
and reenie took a photo.
not good.
but funny at the same time.

and reenie and i went to this club called cheeky monkeys!
it was a backpacker club and we got to dance on tables [EVERYONE was] and they played great music such as:
+"wake me up before you go go" by wham!
+"somebody told me" by the killers
+"mr brightside" by the killers
+"billy jean" by michael jackson
+"are you gonna be my girl" by jet
and much, much more.

and i spent $7.50 on a smirnoff! i'm a freaking moron. i had just been declaring that no one EVER would pay that much when it is $11 for a four-pack. but whatevs.

by the way, "whatevs" was the word of schoolies.

gawsh, i just love them all so much.
them obviously being jess, reenie and justy.
gahhhh.

alot of the week we hung out at our cabin on the verandah playing cards and listening to music.
so much so that we made a ( Collapse )

ps. i lost my thongs. that's right, i was wearing my thongs to the beach
one night and it was a scary, secluded beach that we had never been to before so us girls got scared and decided to leave and i accidentally left them on the beach.
and i am so so mad.
i love those.
and i had to wear stupid converse shoes all week. to the BEACH!
gahhhhh.

breakfast burritos? fuck yesss.
they are far more awesome than they sound.
i love byron bay.

i'm already living the life of a uni student:
no sleep, no food, and fuelled only by the overwhelming urgency to reach my next destination.

haha, i got some random stuff and there are a couple more that are still coming:
+gorgeous necklace from pat and todd.
+bracelet from katie and ali. really pretty :D
+$90 cash in total.
+less than jake and jeff buckley CDs.
+the film "the aviator".
+mini alcohol bottles from georgie!
+random boxes of chocolates.
+an IOU ONE PERFUME from jess and lilface.
+shot glass from joe.
+bracelet and pretty diary from ashley and katrina.
there was some other stuff but i'm pretty darn tired.

but now, without further delay...
PEEKTURES!!!!

AND IN MY EYES, THE PHOTO OF THE EVENING: 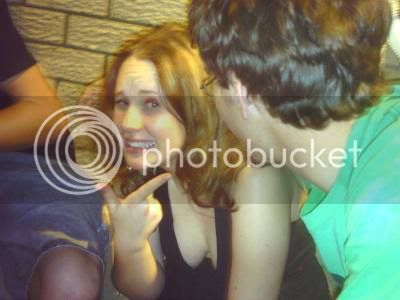 Tim's drunkenness finally getting to Holly... Haha, love these kiddies.

edit: for some reason, some of the resizings didn't work properly.
i totally cannot be bothered to fix it now, but i will do it tomorrow.

what i want right now:

+an iPod
+"fall out boy" albums... i don't own them and i sure as heck need to
+same with the band "panic! at the disco"
+jewellery... pretty bracelets and etc. i love that birthdays are so blatantly for basking in your own brilliance. (hint: silver > gold).
+clothes... i freaking need them so bad. anything nice. i'm really not fussed. but can everyone stop thinking i'm small, i'm a freaking size 14! :(
+alcohol... not beer/scotch. ewww. vodka and girl drinks will do me just fine.
+phone credit (optus prepaid) and/or money
+gifts from the heart... as cheesy as it sounds. i am lame and sentimental like that.
+the basic eight
+fight club dvd and/or book
+a pretty journal so i can get over my internet dependency

now everyone can stop bugging me :P